I was at a book sale and signing event recently, sharing a table with another writer. The bookstore, located in a place with virtually no foot traffic, was near-empty, and the only people who came to our tables were interested in getting our signatures so that they could use them to enter a raffle the store had organized. My table partner and I spent the time talking about the usual things: book marketing strategies, the publishing industry and our current projects.

Eventually, I asked the guy, “What are you reading?”

He shrugged and said, in a tone so casual to be almost dismissive. “Eh, I don’t really read books. I’m just not really into them right now.”

I had no way of preparing myself for this. The guy was young, in his mid-20’s, right at the age when I had discovered writers who would remain favorites for the duration of my life, whose influence on my writing will never evaporate. He was at the age when I—no children or frightening responsibilities in my life—read between two and three hours each day, towers of books on my nightstand, desk and toilet tank. To this day, I don’t ever leave the house without a book in my bag, so I simply couldn’t hide my shock. “You don’t read?”

“I mean, I do research for projects. I like to study, mostly, so I get stuff from the internet. But I just don’t read books right now.”

I started stuttering. Perhaps I appeared offended. The experience was painful, stinging, unfathomable, inexplicable…I felt strain in my stomach and was overwhelmed by an urge to clench my teeth. “So, how do you work on craft without looking at stuff written by people who are better than you?”

“And…these writers. Do they also reject books? Do they ever tell you things like, ‘Your writing reminds me of such and such?’”

“Maybe they like books, but we don’t talk about it. The group is all about writing, so we focus on that.”

I sat with his answer for many minutes, feeling the silence stretching between us like a bungee cord about to kick back with the force of a falling elephant. I imagined the guitarist who did not listen to guitar, the painter who did not look at paintings, the doctor who rejected convalescence, the teacher who had nothing to learn. On any level, in any environment, the sculptor who had no use for sculpture would be considered a buffoon. If a singer came to a singing coach to reveal she had no interest in listening to song, the coach should send her packing. Yet this young man sat cocksure and certain of his intrinsic talent. Reading would be an admission of either weakness or incapacity.

I finally asked him, “How do you rationalize selling books to people when you don’t want to buy or consume books yourself?”

“Yeah, I get that point. I mean, it’s true, I guess, kinda. But I just got so many things on my plate. I don’t need to read someone else’s stuff to sell my own.”

I realized I was the only person to have ever asked this man that question. His education and culture must have reinforced his position as reasonable and rational. Still, I’d have a much easier time with the pharmacist who knows her wares are poisons just as I could get my head around the grocer who sold high fructose corn syrup without ever eating it himself. But…dude…these are books.

In America, in the 21st century, it’s not just the president and his followers who don’t read. Some writers have also joined their ranks. 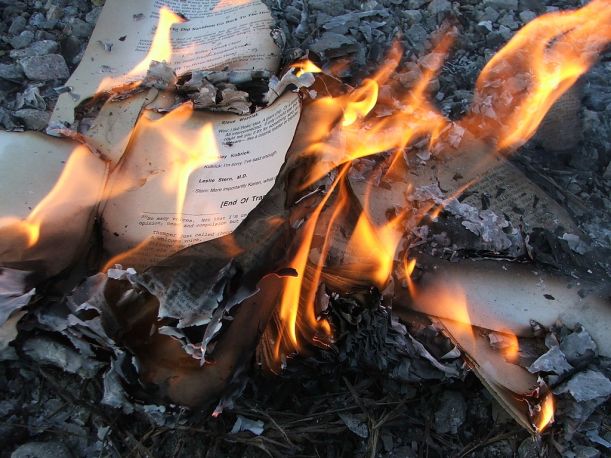 Photo of a contemporary book burning from Wikipedia.